He is currently President of the Central Union of Greek Chambers of Commerce (UHC) and of the Athens Chamber of Commerce and Industry (ACCI).

Born in 1960, studied Finance and Political Science at the University of Essex in United Kingdom, and pursued postgraduate studies on financial applications at the London School of Economics & Political Science (MSC).

Since 1988 he has been the Chairman and Chief Executive Officer of SWAN SA, an industrial exporting company based in Krioneri, Attica, specializing in the production of natural latex products. From 1993 to 2005 he was an elected member of the board of ACCI. From 1998 to 2002 he was Treasurer of the ACCI.

In 2002 he was elected in the Board of Directors of the Arab-Hellenic Chamber of Commerce and Development, in 2004 he was appointed as the Chamber’s Vice-Chairman, while in 2003 he was elected President of the Association of North Attica Region Enterprises.

In the period 2004-2005 he served as Senior Adviser at the Ministry of Development. From 2005 to 2006 he was the Secretary General of the Ministry of Economy & Finance. He has also been member of the Boards of Directors of the Greek Telecommunications Organization and the Greek Public Power Corporation.

Constantine Michalos is married with four children, and speaks English and French. 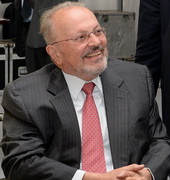 Stavros Hatzakos is working in the Port of Piraeus for the last 31 years and has served in various managerial positions. Since 1993 he has been responsible for the international relationships of the Port.

Stavros Hatzakos is a founding member of MedCruise, the Association representing cruise  (Mediterranean Association of Cruise Ports). Having previously served as MedCruise vice-President, in 2011 he was elected President of MedCruise and since 2014 he is the honorary President.

He is also the representative of Piraeus /Greece in the Executive Committee of ESPO (European Sea Ports Organization), since its establishment in 1993. He was elected twice as Chairman of the ESPO Transport Committee and since 2014 he is the Chairman of the “Cruise and Ferry Port Network”.